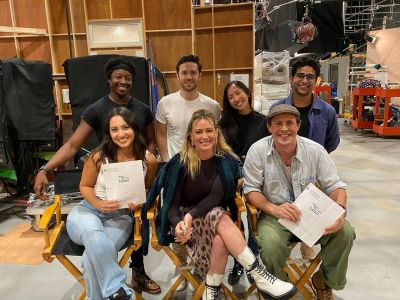 The 10-episode comedy counts original HIMYM creators Craig Thomas and Carter Bays among its exec producers stars Hilary Duff as Sophie, who is telling her son the story of how she met his father. The series revolves around Sophie and her close-knit group of friends who are in the midst of figuring out who they are, what they want out of life, and how to fall in love in the age of dating apps and limitless options.

This Is Us and Love, Victor duo Isaac Aptaker and Elizabeth Berger are set as showrunners on HIMYF and exec produce alongside Bays and Thomas, with original series director Pam Fryman on board in the same role.

Hilary Duff (Younger) stars as Sophie and serves as a producer on the series.

Chris Lowell (Veronica Mars) plays Jesse, an aspiring musician who works as an Uber driver to make ends meet. He’s described as having an edge and cynical about love and who lives with his best friend, Tom. (Clearly taking a page from Ted and Marshall in HIMYM.)

Francia Raisa (Grown-ish, Dear White People) plays Valentina, Sophie’s roommate. The character is an aspiring stylist and Sophie’s great friend. She’s impulsive and adventurous, and Sophie relies on Valentina’s ability to cheer her up when she gets down. Valentina has just returned from London Fashion Week with the gorgeous Brit Charlie. Raisa, who donated a kidney to friend Selena Gomez, counts The Mindy Project, The Secret Life of the American Teenager and Bring It On: All or Nothing among her credits. She’s repped by APA, Artists First and Goodman Genow.

Tom Ainsley (The Royals) will play Charlie, an aspiring model who fell in love with Valentina at London Fashion Week and who followed her to New York. The son of conservative aristocrats, Charlie’s a great guy, but he’s been living in a rich person’s bubble his whole life. Ainsley, repped by United Agents, Luber Roklin and Greene & Associates, counts Jarhead, Serpent, Safe Inside and Versailles among his credits.

Tien Tran (Space Force) will portray Ellen, Jesse’s adopted sister who just moved to New York from a small farming town after separating from her wife. Ellen is more comfortable on an organic lettuce field than in a Brooklyn dive bar. Tran, a comedian, actress and writer, counts onscreen roles in Space Force, Easy and Sherman’s Showcase. As a writer, she’s worked on Showtime’s Work in Progress. She’s repped by CAA and Mosaic.

Thomas recently tweeted that he met with the cast of six, describing them as a “goddamn delight.”

A premiere date for HIMYF has not yet been determined. The comedy was picked up straight to series in April after two previous attempts that were passed over. For more on those, read THR‘s original news story on the Father pickup

How I Met Your Father
Seizoen 2
Sophie
INFO / FOTOS / VIDEO's